WYCJ participation at the Stockholm +50 Event

On Friday 3rd of June, for the second and last session of the event, the day began with a strong start: a meeting with Ambassador Olof Skoog, Head of the EU delegation at the UN. He seemed not to be well-informed about the AO procedure and impact, so our conversation began with a quick recap, leading us then to explain to him how he could possibly give us a hand. Basically, given his position, we definitely thought he might have an influence on some European countries where we don’t have any campaigners or that might be difficult to convince to support the vote for the AO in September. The Ambassador said he would try to gather most European countries around a unique position in favor of the AO, though it might be a difficult goal to reach. In fact, although some European countries are more likely to vote for or have already confirmed their support, such as Germany, others appear to be more reluctant toward climate change and human rights issues.

The last morning side events were already full and it was difficult to find any seat left. Meanwhile, we decided to write some mails to people we met the previous day. At this moment, a lawyer we had quickly talked with Thursday afternoon wanted to meet us longer again. The meeting didn’t end up well. Though he believed in the philosophy and the merit of the campaign, he undermined the lack of a “clear outcome” of the campaign and also pointed out our “poor concern of the procedures”. In fact, he argued that “climate justice” is not a legal term and therefore isn’t relevant. He also added that the ICJ’s judges, who can be very conservative and procedural, will never consider the question because it crosses two fields of law, human rights law and environmental law.

After this “unusual” meeting, I headed to a side-event conference around Environmental Crises as Humanitarian Crises, which was followed by another conference entitled “Towards A Sustainable, Youth-Inclusive Future: Presenting the demands of the Stockholm+50 Youth Policy Paper ». This last one presented the work done by the youth task force over the past few months in preparation for Stockholm+50, which consisted in writing a paper summarizing their key policy demands. For instance, the first part of the paper was entitled “Reflecting on the Urgent need for Actions to Achieve a Healthy Planet and Prosperity” and included demands such as “1. Recognize the right to a healthy environment, and introduce a large scale environmental destruction, ecocide, as a punishable crime in international law”.

The previous day, after a conference, an American journalist for InsideClimateNews, Katie Surma, came up to us saying she would be very interested in interviewing us. Hence, I were appointed by Mrs. Surma for an interview by the end of the day. She showed a strong interest for the campaign. The questions were first mainly focused on our personal background, on the campaign itself and on our personal involvement. Then, Mrs. Surma asked us a couple of question on what was the impact of an AO in our opinion and how it might make things change from a legal point of vu.

To sum up these two days, our main goals have been achieved: we gave more visibility to the movement, we found new potential “Friends of the Initiative” and contacts that might be helpful, we met influential political leaders in person, and we reached out with success new campaigners. We are very satisfied of the work done by the team during the Stockholm+50 conference. It was great seeing some of the members again and meeting other nice stubborn optimists at the event! 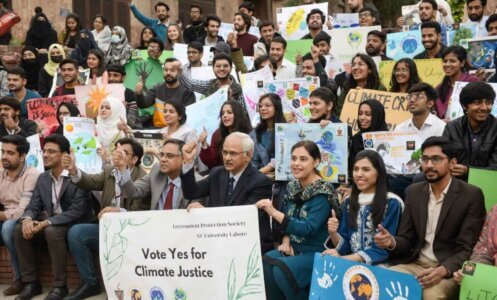