Presentation of the Normandy Chair for Peace

Since 2016, the Normandy Region has initiated a World Peace Forum; it wants to affirm its ambition for international action in favor of the values of peace, freedom, human rights and democracy. This ambition is rooted in its history and in its link to the history of the world. It is rooted in the tribute paid by thousands of men in June 1944 on its beaches where the Battle of Normandy began and which would lead to the defeat of the Nazi regime. Tens of thousands of young men, but also thousands of civilians lost their lives in this key battle at the end of the Second World War. Recognition and remembrance today call for vigorous action for peace. Many other less dramatic moments in the history of Normandy are related to these values and have often contributed to the international humanist cultural heritage. This is true of Norman law, which irrigates legal traditions on both sides of the Atlantic, of the circulation of humanist ideas since the beginnings of printing, of the intellectual soil that participated in the intellectual effervescence in Europe in the 17th and 18th centuries, of the creation of the first academies of science or of French, or of the writing by the Abbé de Saint-Pierre of one of the first treaties of perpetual peace and of the European project in the 18th century. 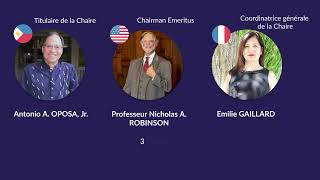 The Region intends to make its contribution today to this vast construction for Peace so necessary. This is the meaning of the Normandy World Forum for Peace, whose 2019 edition has led to the launch of a new international appeal by four Nobel Peace Prize winners. Based on the symbolism of June 6, this Forum is an annual event of high level and international scope.

In this context, the Region wanted the international academic world in cooperation with the academics of Normandy to participate in this construction. The proposal was made to create a chair of excellence for peace, open, flexible, academic and innovative, international and including a strong societal dimension.

Chair of Excellence for Peace

Such a chair is built over time, it is expected that it will be transversal, multidisciplinary, and that it will establish a permanent creative program and reinforce the regional research system on the subject.

The scientific personality is expected to bring his or her vision, to share it with his or her university contacts in Normandy, to imagine with them and his or her networks the modalities for the construction of reflections and the training of young researchers and students, and to disseminate these reflections to a wide audience.

An innovative formula: a chair-device

The Chair for Peace was conceived according to an innovative mechanism: a chair-dispositive and not just an individual chair. The advantage of the Chair-Dispositive is that it offers a robust assembly involving several scientists, associating complementary skills and freeing itself from the risks inherent in an isolated individual. A Chair is made up of the Chairholder, who designs, drives and pilots the project, a group of internationally recognized senior scientists who contribute to the project, and a group of junior scientists in the midst of their scientific careers. The group develops innovative and complementary research and training activities with an intensity and visibility that obviously exceeds what one person could accomplish alone.

This requires a highly recognized leader, capable of gathering high-level peers willing to work with him, and a supporting institution experienced in large-scale and innovative research projects. These ingredients are present in this case. The CNRS Normandy Region For Peace Chair is built on this logic of a robust and innovative mechanism.

An international team was therefore set up under the leadership of the Filipino lawyer Tony Oposa. This pioneer of the law of future generations has gathered around him a team of researchers who are developing a new approach to the law of transgeneration.

The research notebook will develop the scientific news of the Chair on the following themes: sustainable cities, success stories, climate justice for future generations, legal protection of the commons and on the legal indicators of the effectiveness of this right of future generations.

The expected readers are those of the academic world, the judicial world but also articles for the general public and the media will be prepared.